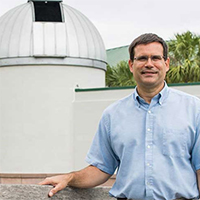 Like musical instruments, stars oscillate because sound waves are travelling around inside them. We can’t hear those oscillations through the vast vacuum of space that separates us from even the nearest star, but they produce tiny periodic changes in the light output of the stars, and those we CAN detect. Just as the notes produced by a musical instrument reflect the size, composition, and structure of the instrument, the notes produced by the stars have the ability to tell us otherwise inaccessible pieces of information about them, including their structure, age, and even internal rotation. I will show how this process works, how recent spacecraft like NASA’s Kepler and TESS missions have allowed us to apply this new tool to thousands of stars, and what more we expect to learn in the near future.

About Dr. Buzasi -  Derek received his undergraduate degree in physics from the University of Chicago, and his PhD in astronomy from Penn State University. He has worked at a variety of institutions, including the National Center for Atmospheric Research, Johns Hopkins University, the California Institute of Technology, and the University of California at Berkeley. Most recently, he served for ten years as Professor of Physics at the US Air Force Academy. Derek has published more than 120 papers, and has also worked on a variety of major instrument teams, including Detector Scientist for the Cosmic Origins Spectrograph, part of the Hubble Space Telescope's most recent upgrade, and Principal Investigator for the Wide-Field Infrared Explorer satellite. He currently serves on the Science Team for NASA's planet-finding Kepler mission.

Derek's research interests include almost anything having to do with stars. He began by studying various aspects of stellar (and solar) activity, such as spots, flares, and winds, and has done both observations and theoretical work, including radiative transfer modeling and magnetohydrodynamic models of stellar flux tubes. More recently, he has moved from studying stellar atmospheres and environments to studying stellar interiors and convection through the use of asteroseismology. Derek also works on computer modeling, particularly of nonlinear systems, and is co-author of the chapter on Computational Astrophysics in the CRC Computer Science Handbook.

Derek is also a reserve Navy Engineering Duty Officer with the rank of Commander; his current assignment is with Pearl Harbor Naval Shipyard in Hawaii. In his free time, he enjoys sailing, swimming, and reading, along with just hanging out with his wife Heather and son Grant. He is excited about becoming part of FGCU and advancing the teaching and learning missions of the institution.